Captain’s log, stardate 48734.2. Sometimes it’s a good idea to get away from being a Captain for a while. To that end, I’ve started participating in a new holonovel. The setting is ancient England.

DISCLAIMERS TO THE AFFIXED TIMELINE

As Captain, I reserve the right to change, amend, edit, or otherwise fool around with the dates and data provided here. I wrote this trying to get the approximate spacing correct and less to be completely accurate on dates. 1900 could turn into 1898 or whatever. Oh, and I will undoubtedly make some mistakes and mix things up. But I will also get a few things right. Thx for stickin’ wit me.

I performed some preliminary bookkeeping to graft some of the loners into the timeline. Notes on changes are affixed to the end of this timeline document. Notes only really matter if you were reading pre-2020… But if you’re interested in pr realfact, then take a look.

(1600) Shakespeare “the Bard” and Elizabeth “the Queen” are visited by the Indian, Spokk, and receive the Good News as a seed for a New World Tree

(1727) Sir Isaac Newton, the last father of Old Science, dies and with him, the First Church

(1727) Newton’s protege, Leibnez, leaves to search for the resting place of Buddha. He takes the name Tu’vokk.

(1785) Straud moves to Amerka, buys swath of land he calls the Forgotten Hallow

(1883) Randall Thor, a redbrawn, is born in Indonasia, son of Dutch plantation owners

(1911) Weaslie and Madleine Francisco kill Zoe under the claim that she is the reincarnation of the evil spydercult of vampresses. the court upholds the violence as just and within the Law.

Myrtle studies language while in Paris

(1914) Straud marries Avaelle but she splits the year between the Straud Mansion and the Easton Estate.

(1916) Vincent Marscapone is injured and becomes bound to a wheelchair

(1932) Myrtle begins quiet work as the White Which, Granny Sepal is her Right Hand Man

(1942) Bronald grymform encounters the Atlanteans, he becomes acquainted with the Seaking Neelix

(1950) Kirk and Janeway are drafted by Amerka to serve in what mankind will call the First War, wherein Magick is Reintroduced

(1950) Straud replaces Avaelle’s backbone with a graft from the World Tree - she renames herself Lisa.

(1953) Lisa founds the Institute of Artsenscience on Neurwest, an area created by fill dirt on the coast of Booklyn

(1954) The First War ends when the Moon Princess descends and forces immediate ceasefire. She creates what she calls the Golden Rule, and what mankind calls the Great Truce: no man may harm another lest they be banned from rebirth in the Silver Millenium

(1955) Admiral Kirk discovers his mother is a witch when she insists he pursue appointment in Londonton.

(1956) The Institute relocates to Denbrr

(1957) Granny Sepal begins work as assistant to the Moon Princess

(1966) Vanpyr Newton is cloned and kept at the Institute

(1968) The Dax symbiote joins the Institute. Straud jokingly refers to this mistake as the British Inversion

(1970) Vanpyr Dali is cloned and released as Dexter Zhou

(1973) Rape of Manking: The Vatore family steals Rini while she is being fostered at the Straud Mansion

(1976) McCoy hired as a nurse assistant at The Institute

McCoy is a very unhappy man

(1977) McCoy found guilty of poisoning the popular Cadry Son brand of plasma packs, all claimed to have been QA tested through The Institute. The spread of poisoned plasma packs lead to the Great Culling, the death of some 90% of active vampyres, all male. The vampyres attempt to hide the bodies, but death rituals are lengthy procedures and they get backlogged. The bodies are being held in vampiric slumber by their masters while rites can be arranged, but when the bodies start to grow sporing mushrooms that make you sick, there is an immediate call to cease ritual in favor of asap cremation

(1977) Mandarc looks over his records and suspects he is experiencing memory loss. He finds irrefutable evidence that Straud is his birth father and not Vincent Marscapone, as he had been told from childhood. Ezri Dax is not a true vampress, but an ancient carrion werm and its set of drones/werkers, all cast in human flesh. Unknown to Mandarc, Straud intended the two of them to marry to seal a peace deal with the aliens and their allies. Mandarc refuses to consummate the union, the werm goes into a rage and betrays her trueform. Mandarc kills her in retaliation, wounding the Dax neuralnet.

(1978) The Unfortunate Discovery, wherein vampirism is made known to the masses. A rush on cremations of the poisoned vampire bodies that were largely undocumented was published by Jadzia Dax, who admitted to being wermkyn. The anniversary is called D Day or Discovery Day by layfolk. A common misconception is that it is the Dax Day.

(1978) Kirk publishes a response to the Dax Expose where he defends Mandarcs work as a patriotic act again extraterrestrial threats. It is largely panned by the public as area 52 style conspiracy theory

(1979) Straud orchestrates the First Revenge, wherein he with Lisa’s help, commits the first documented male on male vampyre murder when he burns down the house McCoy is sheltering in. Straud is sentenced to lifetime house arrest, though he is a notorious violator.

(1980) Cass Elliott opens the Orphanarium in Booklyn on half of Marscapone Holding and outs herself as first publicly known female vampyre. the Orphanarium is dedicated to discouraging young men and women from becoming vampyres by teaching Magick instead

(1982) rumors begin to circulate that fruit from the so called World Tree may be cultivated to create a fruit that will free the vampires from the bloodthirst that fuels their immortality. Jim Lusk reads these rumors on an online forum on the so-called dark web

(1984) A young vampire, Jim Lusk, sneaks on to the Oborovsky residence and steals from Svetlana Oborovsky’s collection of trees from the Old World.

(1985) Norah Zhou is born to Summer Holiday and Dexter Zhou

(1986) when the trees don’t fruit, he confesses and asks for her help stealing from Mandarcs old laboratory

Mandarc has a strange television PR 2017.

(1987) Jim Lusk figures out it’s an invitation to join the Neu Fraternity, a recently formed pact of peace in the vampyre world. Jim had no idea about the depth of vampyre culture until this moment. his idea of growing “peaches and cream” is snatched up by Straud into a joint operation with Kevin Marscapone, sponsored by the old vampyr Straud. and they all keep claiming to be good vampires and dedicated to fighting crime and the forces of evil. it kind of weirds Jim out. but he and Kevin sell fruit to vampyres and become known as the Kandy Kingpins

(1990) Vatores break into a warehouse and steal confidential records of the Institute that concerned cloning technology. They use the cloning tech to Clone Rini to make the Qibot that goes by the name Queen Serenity.

(1991) CPT Janeway finds Darien Endymion collapsed on the sidewalk outside her office. She takes him to an urgent care center where she insists he’s the Moon Prince and he’s been thrall, or bloodslave, to a vampire. The case goes viral and increases suspicion of vampyres violating the Final Truce. Darien has not aged, physically, and refuses to speak against the vampyres, insisting all Earthicans should band together against exploitation of any race, breed, or creed

(1991) Myrtle adopts a young redheaded girl that she refuses to give a name, startling the young acolytes.

(1992) Lilith Vatore breaks contact with Caleb and sheltered by the ferener, Quark.

(1992) Mandarc takes parole from public grant, largely from the outed vampire Dali to continue work on a bloodfood substitute. Dali goes by Dexter Zhou among vampyres and the location is colloquially known as Dexter’s Lab. Mandarc thinks of his dog, Dexx, whom he lost some time ago. Kirk, Jadzia, form the staff. Lisa, Newton are here serving house arrest

Granny Sepal cleans out her drawers

(1993) Maurice Whetherspoon starts alpha testing on what he calls the EMH, the extra marital healagram, designed as a conversational database for Janeway to try to combat her addiction to pornography. He used old style audio recording devices such as microphones and new style binary choice processing and g’Houle-Internet integration

(1993) Myrtle is outed as a vampress and her alibi as the White Wich falls apart. Tzu Prano and Mezzo Forte take credit for the Discovery. Commoners spread rumour that Mandarc killed her to take control of the family. Myrtle commits suicide by sun. The loss of the wulfcult Mother is referred to by the mourners as Y2K

(1994) Kevin Marscapone goes AWOL, takes Myrtle’s urn with him. Tzu Prano opens the family home as Tzu Pranos Magicademy for Relapsed Sorceresses. She makes a Truce with Jim and permits him use of Kevin’s trees

(1994) Jim Lusk outs self as vampyre and makes a public scene of surrender when he joins Janeway’s Maurauders, a group who’s made it their sworn cause to convert or kill any vampire they find

(1995) Jim starts the Applefruit company using plants lifted from his operation with Kevin, whose products claim to keep any vampiric influence at Bay, and begin research on The Cure. His attempt to break ties with The Fraternity aren’t taken seriously and his primary contact becomes Svetlana and he’s instructed to drop all ties with Kevin

(1998) Janeway rebrands to Janeway’s Crew, fires Maurice and Jim and ceases use of the EMH

Consent wins the award for 1998

(1999) Kevin masquerades as the Kingpin Lusk, moves back into his family home as lead consultant on ancient knowledge to the Magicademy

(2000) Janeway et al publish the online series the Hex Files, wherein they make video about their hunts for supernatural creatures of the night

(2004) Bronald Weaslie reappears as a fellow intern at Critiik Bootiik, a lifestyle websource based out of New Amsterdam, and meets Kess

(2009) Granny Sepal convinces Mort that the computers aren’t surveying his house and even if they were, he should try to get along regardless because he doesn’t have a sufficient power level to make permanent change in his environment. He concedes defeat and the family purchase a desktop computer

(2012) Bronald, Neelix, Roy, Cassandra work together on the Weston Coup, where Kess is exposed as the reincarnation of the alien vampress pterofyn (dolphin). he orchestrates a simultaneous vampress murder and damning expose on the internet of her plans to use the merfolk for an attempt at world domination. he is championed as a hero of humanity but disappears before the award ceremony

Hermi is rebelling against judeochristian symbolism

Straud has good ideas but struggles with execution

AVAEL gets into stuff she couldn’t know crap about

Kevin tries to start the RPG to end RPGs

(2019) Tu’vokk and Neelix bring the young child, called JunioR, to the Orphanarium and begin classes in practical magic

Kirk’s TV is getting weird again

(*) Cars and their teeth

(*) May 14 - Egwene hasn’t told anyone else about the videogame

(*) May 20 - Kevin’s notes are getting complicated

(2032) Queen Serenity begins the War on Fun after Caleb, Cedric, Lilith play a practical joke that she doesn’t appreciate 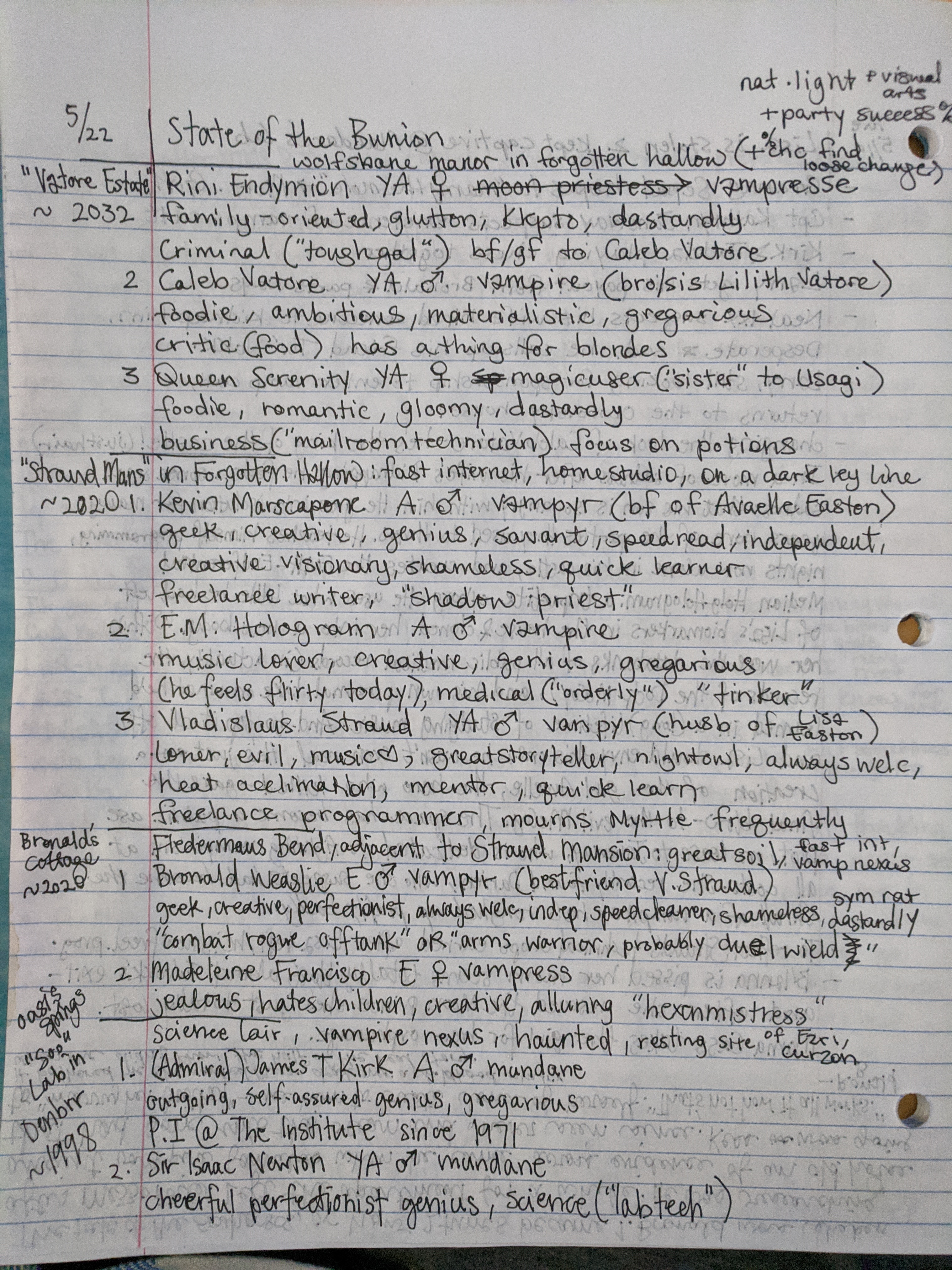 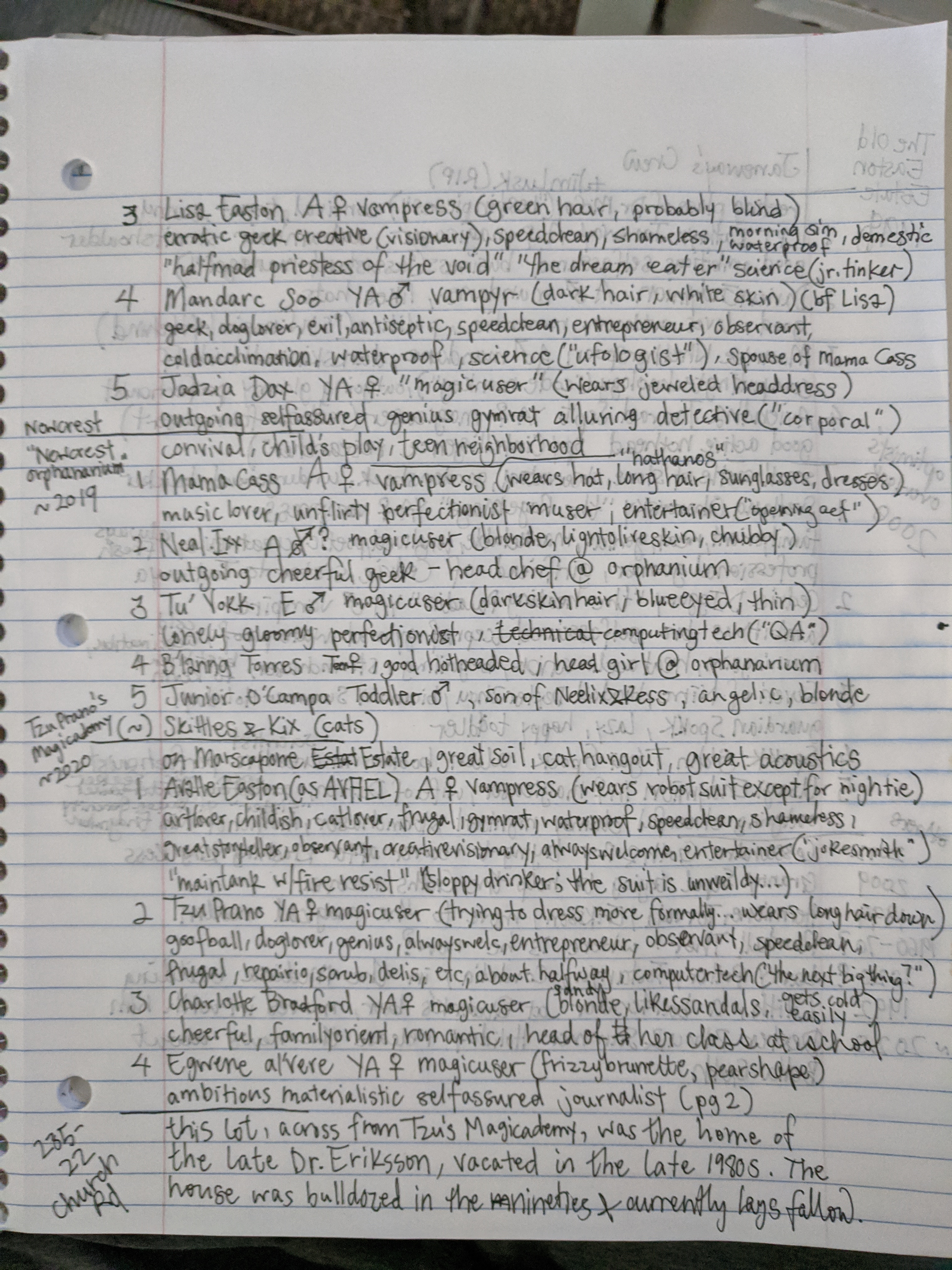 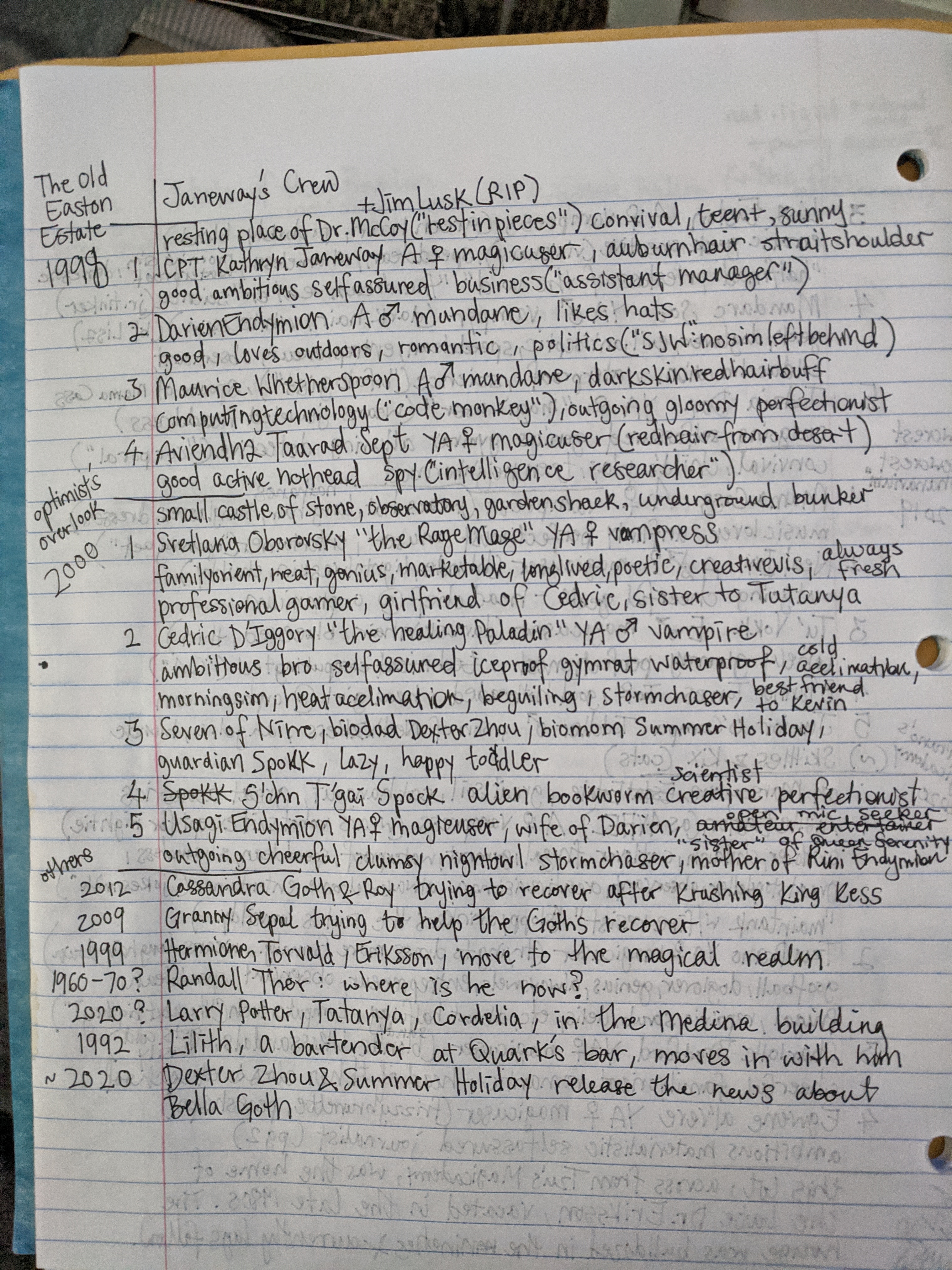