It is a cold morning in Eastern Suffolk County. In the wee hours of dawn’s twilight, inside the bedroom of a large country house, a young blond man uses a computer, apparently some kind of relay chat.

Dreams have been off and on, but I had one last night. A long one. Vivid.

Probably would be having more if I could lay off the juice.

On the other hand, it's the only reason I'm here this morning.

I was living in the suburbs, near a series of strip malls and an outdoor train station.

There were no cars about.

I was walking around in what I recognized to be the early morning, though the sky was lit up fantastically.

I was barefoot, trying to make my way over the blacktop, but the ground was littered with broken toys, particularly many shattered plastic trains.

When I got to the train station, I walked up the steps amid sizeable crowds of people.

I arrived at the platform just in time, I thought, to board a train labeled as both an R and a 1.

But when I tried to enter the door, I was limited to very slow movement. I felt weak, frozen. Perhaps I was even too tall to get on the train; the the roof seemed to meet my eyes. But the time allotted to me by the conductor wasn't enough for me to get on the train. They even opened the door a second time, presumably to allow me to enter, but I was too slow, too tired; I couldn't enter and the train left without me.

I missed the R/1, but I was able to see a commuter train whiz by away from the station and I felt glad I didn't have to take the local.

I'm not sure if I was actually on the train -- I was seeing it from the side.

Then I was back in my apartment, my bedroom.

In my bed was a classmate of mine from middle school who I seemed to recognize as my lover.

He wanted to lick the surface of my feet -- when he found they tasted like the filth of the city ground, he was shocked and disappointed.

I left the bedroom, which opened up on the living room, a dimly lit sitting area, a TV blaring in blue, and populated with my high school friends babysitting my young children.

Are you still intending to go after the old woman's request? 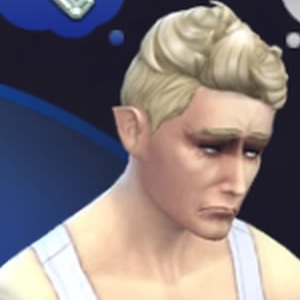 I was going to, yeah.

CEDRIC employs a number of protocols to disconnect his computer from the ‘Net. The monitor goes black and the whirring of the cooling fan drops out of the room’s noise. A bird tweets mournfully in the background.

Hanging on the inside of the door, in a burlap-backed plastic sleeve, is the dark, almost black uniform of a police officer. The winter jacket is festooned with the usual accoutrement.

The mid-morning sunlight is setting the snow aglitter. A yellow one-story home is beginning to shuffle with life.

Outside the front of the home is a brown-haired woman just starting to show the signs of middle-age. She wears a bright cyan robe and chunky black snow boots. She is fetching the morning paper.

Walking down the sidewalk is a man adorned with the familiar trappings of the NYPD.

The woman is raised to attentiveness, suddenly embarrassed for her manner of dress.

CEDRIC inwardly chafes at the address.

INDEED. PEGGY HILL. AT YOUR SERVICE!

PEGGY walks over toward the police officer and tries to discretely look him over. But her eyes gloss over and her expression softens. CEDRIC tries to keep from visibly wincing.

CEDRIC removes his cap to reveal pale blond hair cut short around his skull. In the snow’s reflection, the scar running down his face seems especially apparent.

PEGGY contemplates reaching her hand out to greet him but thinks better of it. CEDRIC’s jaw twitches with tension.

MY APOLOGIES FOR DISTURBING YOU SO EARLY IN THE MORNING BUT…

He pauses, searching for words, uneased by her gaze.

ARE YOU A TEACHER AT TOM LANDRY MIDDLE SCHOOL?

An open-mouthed, awkward smile flashes; PEGGY seems aghast with both pride and embarrassment.

THERE’S BEEN AN INCIDENT AT THE SCHOOL.

PEGGY wants to draw her hands up to her mouth but the newspaper in her hands prevents her from doing so.

WOULD YOU BE ABLE TO PROVIDE A STATEMENT?

SURELY. ANYTHING YOU NEED. JUST –

I’LL LET YOU GET DRESSED. THIS SHOULDN’T TAKE LONG. WE’LL HAVE YOU BACK AT SCHOOL BEFORE THE FIRST BELL.

She looks around nervously.

I NEED TO FINISH PACKING MY SON BOBBY’S LUNCH, IF THAT’S OKAY.

She raises her hand to the side of her cheek, as if anyone were around to hear the secret.

TOFU DOGS FOR HIM!

She laughs as if she’s made a clever joke. CEDRIC feels it would be appropriate here to chuckle with her, or even smile, but he has difficulty mustering any sort of reaction.

A cold wind sweeps across the lawn.

PEGGY notes the lull in the conversation and points toward the house with her paper in hand.

PEGGY quickly returns to her house, removing the newspaper from its plastic sleeve and setting it upon the table.

When PEGGY reappears, she’s covered with a puffy down coat. She approaches a jog over the sidewalk to stand in front of CEDRIC.

IF YOU’LL WALK WITH ME.

BUT A LOCAL PHILANTHROPIST HAS DONATED HER HOME FOR OUR TEMPORARY USE.

CEDRIC is glad they are finally walking. He tries to maintain absolute calm despite dread creeping into his consciousness.

Soon, they are in front of a row of antique townhouses. Dark bricks remind CEDRIC of the vision of blacktop he suffered during his meditation, but he tries to shake the memory.

IS THIS ABOUT PRINCIPAL MOSS?

CEDRIC does a bit of a double take, having momentarily forgotten his duplicity.

The two stand for a moment in the shadow of the monolithic building.

I’M NOT AT LIBERTY TO DISCUSS UNTIL AFTER I’VE READ YOU YOUR RIGHTS.

CEDRIC follows her. She opens the door and enters.

CEDRIC allows her to step inside and closes the door behind her. The inside of the house is elegant but modern. Medium-toned wood lines an upper balcony. Two wooden columns flank a hallway. A piano is just in view upstairs.

IT IS REALLY QUITE FORTUNATE THAT THE EASTON FAMILY WAS ABLE TO DONATE THEIR ESTATE FOR OUR USE.

PEGGY’s heart drops at the name.

YES. THE MATRON OF THE FAMILY IS A CHILDLESS MUSICIAN. ARE YOU FAMILIAR? PERHAPS SHE’LL GRACE US WITH HER PRESENCE. WOULD YOU LIKE SOMETHING TO DRINK?

Her eyes glance back toward the door, light trickling in through the frosted glass. Escape seems impossible.

I’VE GOT TO GET TO WORK.

CEDRIC removes his hat and places it on a hook on the wall. He talks without looking at her.

YOU SEE. THERE’S BEEN A NUMBER OF REPORTS ABOUT THE PRINCIPAL. TERRIBLE THINGS. ACCUSATIONS OF INAPPROPRIATE BEHAVIOR WITH HIS STUDENTS. YOUNG PEOPLE HE’S SUPPOSED TO BE GUIDING.

HE’S SAID TO BE THE LOCAL RINGLEADER, YES. BUT THERE’S ANOTHER INDIVIDUAL, FROM OUTSIDE THE SCHOOL, WHO’S BEEN DISCOVERED TO BE IN COLLUSION.

I THINK YOU’RE FAMILIAR WITH THE MAN.

PEGGY’s face drains of color, only an artificial blush covers her cheeks. Her lips slacken, leaving the sensation of thick, dry lipstick.

A voice comes from the dark of the hallway. It is a simulated voice, too consistent in pitch to come from a human’s vocal cords. But it is unmistakably intended to imply a female.

THE NAME IS LENARD TRELAINE.

PEGGY turns toward the woman’s voice. In the dimly lit passage, she sees metal molded roughly into the shape of a person but the face is flat and dark.

She stammers stupidly, trying to concoct a lie.

HE’S YOUR DOCTOR, ISN’T HE?

PERHAPS YOU’D LIKE TO SIT DOWN. REMOVE YOUR COAT?

Set in the living room is a pair of plush chairs cushioned in crimson velvet.

PEGGY says nothing, voiceless in fear.

The blond man and the robot surround the woman in silence. She stares at the floor.

(quietly) I THOUGHT THIS WAS ABOUT PRINCIPAL MOSS…

From AVAEL’s vantage point, she can just make out a shadow standing on the porch.

IT’S KNOX GREENBURG. YOU SHOULD TAKE THIS.

HE’S BEEN TRYING TO READ OUR METERS FOR WEEKS.

When CEDRIC re-enters the premises, the living room is empty and the place is devoid of noise. AVAEL, PEGGY have left the entry.

CEDRIC peels away the curtain to watch KNOX GREENBURG walking away from the house. Just before he is completely out of line-of-sight, the cellphone in his pocket buzzes. CEDRIC fumbles while retreiving it.

We have an uninvited visitor. By the side entrance. Please greet him.

CEDRIC places his phone on the table and in an instant, he’s dissolved into mist.

Outside the MARSCAPONE APARTMENTS is a slight adult with dull yellow hair cut into a faux hawk. He tries to slip around the side of the car parked in the driveway when he becomes cognizant of a rising form behind him.

He is unable to turn around before the mist rematerializes into young blond man. CEDRIC quickly pushes the intruder to the ground and brings his arms behind his back, locking his motion.

GET THE FUCK OFF’A ME!

NOT A CHANCE, PAL.

WHAT THE FUCK YOU TALKIN’ ABOUT?

CEDRIC removes a set of handcuffs from his belt and restrains the man, securing his wrists behind his back. He grabs a scruff of the man’s hair, pulling his head to the side, eyeing his profile.

I DON’T KNOW WHAT THE FUCK YOU’RE TALKING ABOUT MAN.

YOU TRYIN’ TO STEAL A TV?

I HEARD YOU WERE A VAMPIRE.

CAMRON tries to flail, attempting to throw off CEDRIC, but he is pinned securely to the ground.

WELL IF IT AIN’T TRUE, YOU WON’T MIND SPENDING A LITTLE TIME IN TIME OUT. I THINK THE SUN’S GOING TO SNEAK OUT FROM THE CLOUDS LATER THIS AFTERNOON.

BUT FIRST, LET ME GET YOU SET UP. WE’LL GET YOU A NICE COMFY PLACE TO SIT DOWN AND THEN I’LL GO INSIDE AND GET YOU SOMETHING NICE TO DRINK.

I’VE GOT A FULL BAR.

Previous// MYRTLE 014: Distraction
in which Kevin tells the truth about the sale of the school
Next// TRELAINE 006: Merely a Setback
in which Lenard convinces Avaelle to have some gumption