It was just a few weeks ago that KEVIN MARSCAPONE received a call from TZU PRANO, a young woman educated at his mother’s school. He regards the young woman as a sort of foster-sister; as one of the last orphans brought into the fold, TZU had become close with the old CRONE and maintained a steady head on her shoulders even through the chaotic last decade of the twentieth century.

MYRTLE MARSCAPONE died in the spring of 2021 in a wizard’s duel with her (former) friend, the witch AGNES SEPAL. VLADISLAUS STRAUD and his followers came to the scene of the crime as quickly as they could but little was able to be done other than speaking with the spirit of the deceased woman.

THE CRONE seems to be suffering from confusion in her later years, alternatively claiming loyalty to her husband VINCENT MARSCAPONE, the PRINCE OF ELYSION, as well as asserting that he owed her favor. Some week after her death, her spirit was called back to the realm, condemned by VINCENT, and imprisoned in a computer’s circuitry for crimes against ELYSION.

Today, KEVIN is inside the walls of the MAGICADEMY’s dining room, awaiting a phone call from the airport.

Next to a white stone bust sits a framed drawing of MYRTLE & VINCENT in wedding attire.

This one was one of her favorites. She didn't care too much for photography, though she tried to fake it.

I just don't think the drawing itself is very good.

I will give her the benefit of the doubt since we had few memorabilia. She enjoyed her keepsakes.

The PRINCE OF ELYSION speaks with a voice only KEVIN can hear. When KEVIN first heard this voice, now many years ago, he suspected schizophrenia, not willing to accept the sound of his deceased father’s voice as anything but superstition. But the doubt subsided in time, and he has come to accept that his father lives on in his mind.

IT’S OKAY. I CAN SEE WHAT YOU MEAN THOUGH.

THE FACES ARE A LITTLE OFF. A LITTLE CARTOONISH.

Nevertheless, VINCENT is able to communicate on the (w)IntraNet, the strange internal message board invented by STRAUD at the turn of the century. Some of the skeptics believe it is simply KEVIN talking to himself, affecting a voice, trying to bring legitimacy to mental illness. But others see the (w)IntraNet as VINCENT’s digital playground.

MOTHER WILL BE HAPPY TO SEE TZU TODAY.

SHE WAS ALWAYS ONE OF HER FAVORITES.

When's her flight getting in?

It's nice that she's driving herself.

Unlike all these other knuckleheads who expect you to drive them around everywhere.

MOM ALWAYS SAID YOU WERE A GOOD DRIVER.

I WOULD NEVER BE AS GOOD AS YOU.

How kind of her.

KEVIN’s phone buzzes, notifying him of a text message. He removes the phone from his breast pocket and swipes the screen open. It’s TZU. He reads the messages aloud.

‘PLANE JUST GOT ON THE GROUND’

‘GOT TO GO PICK UP MY LUGGAGE AND MY CAR AND I’LL SEE YOU SOON’.

‘ARE YOU AT THE ACADEMY’.

KEVIN types out a response, narrating through it. It was a consequence of never being truly alone.

The hallway’s floorboard squeaks, alerting KEVIN to the presence of another.

It is the Vampire GEORGE HENRY, a dear friend of VINCENT’s. He was a highly formal, polite man.

‘CONJURER’ was a title given to KEVIN since he had accepted STRAUD’s CURE a couple years back. GEORGE HENRY did not seem to think any less of KEVIN, but had adopted the title to stress what it was that had been added to KEVIN’s perview.

IT’S QUIET, HERE, WITHOUT MY MOTHER, ISN’T IT?

GEORGE HENRY always displayed a considerable amount of deference and respect toward KEVIN. KEVIN always assumed it was because he was his father’s son, and certainly it had probably started that way. But in his father’s absence, he surmised that perhaps, just perhaps, there was something of a deeper respect growing between the two.

His father’s acolyte had been ‘on the lam’ for years. He had returned shortly after KEVIN had purchased THE MAGICADEMY from MYRTLE last year. It was a splendid thing to see him again.

WE’RE HAVING A GUEST.

HER NAME IS TZU PRANO.

SHE WAS ONE OF MY MOTHER’S LAST STUDENTS.

GEORGE HENRY resists breaking into a grimace. He was not particularly fond of most the young wizards that had called THE MAGICADEMY home.

SHE’LL PICK UP AFTER HERSELF.

IS SHE GOING TO…

OH, WHAT DO THEY CALL IT…

The invocation went by many names, but this was the one most often used by MYRTLE in her teachings. The spell saw a wizard teleport from one place to another instantly.

NO, SHE’S NEVER LIKED TO TAKE THE RISK MUCH, I’VE GLEANED.

TRANSPORTALATE was a risky business. Done incorrectly, one could land on top of moved furniture, and especially in THE MAGICADEMY, one was liable to break china, trip over piles of spellbooks…

THE SPELL REQUIRES A SUCCESSFUL SCRY – OR RATHER, A DIVINATION OF CLAIRVOYANCE.

TZU HASN’T BEEN HERE IN MANY YEARS, AND SINCE THE FIRE…

EVEN IF SHE HAD ATTEMPTED CLAIRVOYANCE, I’M NOT SURE SHE WOULD HAVE SUCCEEDED.

THE PLACE HAS CHANGED.

KEVIN pushes the picture of his mother and father back into the position it had been when he’d found it.

CAN I INTEREST YOU IN GO?

KEVIN, GEORGE HENRY have been playing Go in the sitting room for about an hour when the familiar whirr of a car’s engine rolls into earshot.

It’s one of those new hybrids, with a quiet engine, but even if the pair did not have excellent hearing, the snapping of acorns smashing beneath the vehicle’s wheels give away the visitor’s arrival.

Soon, there is the telltale slam of a car door. TZU walks up to the stoop and knocks on the door.

WILL YOU OR SHALL I?

GEORGE HENRY had been taking it upon himself to stand as the home’s caretaker since his return. No one had asked this of him, but it was, perhaps, a familiar pattern for the man.

KEVIN stands up and smooths his coat. He exits the sitting room and enters the entry-way. The door is flanked on either side by shelving for shoes and outerwear.

Some of these coats hadn’t been retreived for years.

KEVIN opens the door and a stiff wind flows through.

IT’S GOOD TO SEE YOU.

KEVIN backs up into the inner entranceway, just in front of the stairs, to allow her space. In the doorway to the sitting room stands GEORGE HENRY, looking somewhat wary.

THIS IS GEORGE HENRY.

I’M NOT SURE IF YOU’VE EVER MET HIM.

HE’S AN OLD FRIEND OF THE FAMILY.

IT’S A PLEASURE TO MAKE YOUR ACQUAINTANCE.

I’M SO SORRY TO HEAR ABOUT YOUR MOTHER.

I KNOW I SAID IT BEFORE BUT, REALLY…

I COULDN’T BELIEVE IT EITHER.

IT WAS, BY ALL SHOWS, AN INTENSE BATTLE.

I CAN’T IMAGINE WHAT THE OLD WOMEN WERE FIGHTING ABOUT.

"Jeopardy" or "Wheel of Fortune".

(thinking) Good thing they’re played one after the other.

(thinking) No, it was something more vital than that.

You always were miserable at taking a joke.

A silence has gripped the three standing in the foyer.

HOW DID YOU KNOW THE HEADMISTRESS?

MY FATHER AND GEORGE HENRY WERE IN HIBERNATION AT THE TIME.

YOU MUST BE EXHAUSTED.

GEORGE HENRY. WOULD YOU MIND PUTTING ON SOME TEA?

IT WOULD BE MY PLEASURE.

GEORGE HENRY bows and exits down the hallway, toward the kitchen.

KEVIN feels a twinge of anxiety. He looks away from the empty hallway and toward TZU.

WERE YOU EVER MADE AWARE OF STRAUD’S INTRANET?

INTRANET AS OPPOSED TO INTERNET?

IT’S AN INTERNAL NETWORK THAT THE FAMILY USES TO SPEAK TO EACH OTHER EVEN WHILE PHYSICALLY APART.

STRAUD STARTED WORK ON IT IN THE LATE NINETIES.

HOW WOULD I HAVE BEEN INTRODUCED…?

I BRING IT UP BECAUSE… MOTHER…

MOTHER’S SOUL-STUFF HAS BEEN TIED TO THE SERVER HERE.

I WAS ABLE TO, YEAH.

I CAN’T BELIEVE YOU WERE ABLE TO DO THAT, KEVIN!

YOU BOUND HER TO A COMPUTER?

WELL, TECHNICALLY THAT ONE WAS MY FATHER’S DOING.

Y’KNOW I DON’T KNOW THAT I EVER MET YOUR FATHER.

DID YOU EVER GET YOUR YEARBOOK PHOTO TAKEN?

OH, YEAH, I THINK I DID SIT FOR THAT.

THAT WAS MY DAD.

…IT WAS SO LONG AGO.

CAN I SHOW YOU DOWNSTAIRS?

IT’S WHERE I’VE GOT SOME OF THE NEW MACHINES.

The pair walk forward into the hallway but KEVIN stops at a small, non-descript door on the left side.

He opens the door and twists the doorknob from the opposite side a few times, testing the lock. It clicks in its housing.

CAN YOU BRING THE TEA?

The basement stairway is decorated with a few sparse cobwebs.

SHUT THE DOOR BEHIND YOU, WILL YOU?

I DON’T THINK YOU’VE EVER BEEN DOWNSTAIRS TO THE BASEMENT.

IT WAS STORAGE FOR A LONG TIME, UNTIL MOM STARTED TO HAVE TROUBLE GETTING AROUND.

When KEVIN reaches the downstairs, the landing is set up as a computer lab. There are a number of computer desks pushed up against the walls.

KEVIN feels compelled to check the locks on the front door.

But he knows there’s no genuine need to double, triple-check these locks.

He turns back to TZU.

Okay Mother, are you available? 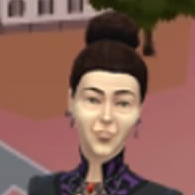 It's nice to see you. I hope you are well.

My aches and pains have disappeared.

Oh, that's wonderful. I'm so glad to hear that.

I don't get tired anymore, none of that.

I can't work the weave anymore but Vincent has promised me that if I properly serve my penance, my time will come.

You'll soon learn more about me, Tzu. I hope you won't stop remembering our time fondly. You were a fine student and I enjoyed teaching you.

I got involved in things more powerful than I could possibly imagine. And now I'm atoning.

I know you'll do what you need to do, Ma.

I'll keep on keeping on.

How is your practice?

They're looking over the house and keeping the floor nailed down.

I'm going to be in town for a week or so, making the rounds, saying hi to everyone.

I'm so glad you're safe, as far as things go.

Previous// MYRTLE 018: Stay of Execution
in which Myrtle begins to pen her memoirs
Next// CEDRIC 026: On the Level
in which Cedric raises a toast to the Crone Marscapone