CEDRIC wakes up. He’s had another daymare about the death experience. He is visibly shaken and slow to rise from his coffin.

He gets up and moving, stretching gently. When he’s done, he reaches for his cellphone.

I was strapped to a hospital bed, in a blue hospital gown, staring at my naked feet.

People were around me, but ignoring my plight.

My vision was fading to black, my energy leaving my body.

And I knew I could do nothing but accept it.

He looks around, surveying his space. A dark, slightly damp basement.

It is moving day. He’s given the keys to MAKOA, the islander. His plasma fruit business in the hands of a foreigner he hardly knows. MAKOA has been in and out the past few days, getting the lay of things.

At least he seems to get along well with Bob.

Can he respect the 'no-feeding' rule?

CEDRIC looks around and allows his attention to sharpen his hearing. Someone is walking around upstairs. The heavy, irreverent footsteps seem to be BOB.

Sometimes a message comes in immediately from the old man, but today CEDRIC is not blessed with the reply.

CEDRIC sits for a moment at a desk and looks at his fingernails. They are clean and trim.

CEDRIC eyes a guitar sitting in a corner of the room. A gift.

It was a kind gift, but I haven't played since before my undeath.

(thinking) ‘What do you think you are, a zombie? You think like that and you’ll become what you hate.’

CEDRIC knows there is a certain truth to the old man’s words.

CEDRIC picks up the guitar and strums gently. The strings press into his fingers and it hurts. But he keeps playing.

Upstairs he hears an explosive chuckle from BOB. It is good to hear him laugh. 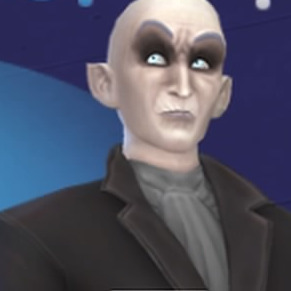 I'd say quit sleeping but I have found that doesn't work either. No, there's not much to do in fixing our anxieties except waiting for them to leave us alone.

CEDRIC looks toward the guitar and back at his fingers. The palest pink lines cross his fingertips.

(thinking) Did it hurt so much back then?

(thinking) It must have been easier to forget.

Certainly he healed faster then. Scratches and bruises went forgotten and unheeded. But now, no, not anymore. Each laceration punished for days, weeks for the worst ones. He could focus his energies on regeneration to speed the process but it was time-consuming and exausting.

The dim noise of chatter echoes through the floor.

CEDRIC takes out a notepad and a ballpoint pen and leafs through scrawlings to find a blank sheet. He tries to write out his dream, getting little more than he’d reported to VINCENT. As he tries to collect his thoughts, he can feel the vision slip through his fingers.

CEDRIC runs the edge of the pen lid underneath his fingernails.

A wind rushes through and blows a sudden clatter of raindrops against his basement window.

CEDRIC ascends the stairs and enters the opposing side of the townhouse. He’s correct; MAKOA is here.

(thinking) Fine, I don’t have to summon him. But it still feels strange to have the islander walk around as if he owns the place.

(thinking) … although I guess he kind of does.

CEDRIC reflects on the fruit business. He’d had a number of offers once he’d decided to sell. Admittedly not the VATORES as he’d hoped, but among the vampire ‘community’, a number of individuals had showed up offering to buy his contacts list. VINCENT had given his vote of no confidence on a number of them and CEDRIC had shooed the rest. So CEDRIC had returned to STRAUD, who said he shouldn’t sell his stake entirely and offered to guide MAKOA through the management process.

He was an unknown, an extremely young vampire, even by CEDRIC’s standards. He was at most a couple of years old, CEDRIC surmised. But CEDRIC wanted out and he was willing to rest upon the gamble. STRAUD seemed to have a hope in the young man.

CEDRIC goes to get the mail. There is one letter of interest: addressed in a careful hand to “Makoa Kealoha”.

He re-enters the apartment. MAKOA is sitting on the couch. He separates the junk from the handwritten letter and sets the remainder in a basket by the door.

THERE’S ONE HERE FOR YOU. IT’S FROM –

(interrupting) I KNOW WHO IT’S FROM. JUST OPEN IT.

The two have not yet made eye contact. CEDRIC’s mouth twinges in irritation.

Dear Makoa, I received your letter. Thank you for telling me instead of just disappearing. Nani will miss you terribly. I will too. She’s never been stateside so this will be a new experience for her. Yes, we will visit if you’ll have us. I can’t say I’m happy about this arrangement but I promised “‘til death do us part”. I hope you’ll return to us when you can. Yours, Lilliana.

CEDRIC passes the letter to MAKOA.

WELL AT LEAST YOU DIDN’T GET SERVED.

NOT MUCH BETTER. BUT WHAT ELSE COULD I DO? I CAN’T FACE THEM, NOT UNTIL I GET MYSELF UNDER CONTROL.

I HATE TO BREAK IT TO YOU, BUT YOU’LL NEVER BE ‘UNDER CONTROL’. YOU’RE SOMEONE, SOMETHING ELSE.

(thinking) Didn’t Straud give him the usual boilerplate? Did he not listen?

The room air is dense with silence.

WE ALL HAD HOPES FOR THE AFTERLIFE; I CAN’T BLAME YOU FOR THINKING YOU COULD STILL BE A FATHER TO YOUR LITTLE GIRL BUT YOU’LL NEVER BE THE MAN WHO LOOKED UPON HER FACE ON THE DAY OF HER BIRTH.

BUT WHAT THE HELL DO I KNOW, MAYBE YOU CAN.

I THINK THINGS ARE DONE WITH YOUR WIFE THOUGH. YOU DIDN’T TELL HER ABOUT THE GIFT?

WHAT, DID YOU TELL HER YOU GOT A JOB OR SOMETHING?

(interrupting) WELL SHE HAD BETTER BE ONE HELL OF A WOMAN OR IT’S OVER. SHE’S PISSED AND IT SOUNDS LIKE SHE DOESN’T KNOW THE HALF OF IT.

YOU REALLY EQUATED THE GIFT TO SOME FUCKING JOB YOU HAD TO MOVE AWAY FOR? THAT YOU WANTED SOME… COMMONLAW DIVORCE SO YOU DIDN’T LOSE VISITING RIGHTS ON YOUR DAUGHTER?

I HAVE TO GO FINISH PACKING. BUT IT SEEMS TO ME YOU TOOK THIS MATTER OF THE GIFT FAR TOO LIGHTLY.

CEDRIC pauses, flashing back to his dream.

(thinking) Way to put my foot in my mouth.

ELIZA TOLD ME, FOR WHAT IT’S WORTH.

AND… YOU JUST ACCEPTED IT?

AS MUCH AS I COULD. BUT I DIDN’T WANT THE GIFT, HELL, IT WASN’T REALLY OFFERED TO ME, BUT YOU KNOW. I DIDN’T WANT IT, LESS SO WHEN THE PROFESSOR TALKED TO ME ABOUT ELIZA’S CHANGE.

NOW IF YOU’D ASKED ME A THOUSAND YEARS AGO, WHO KNOWS WHAT I MIGHT HAVE SAID. I’M SURE IT WAS EASIER TO HIDE WHO YOU WERE BACK THEN.

MAKOA, YOU EVER SEEN THE MOVIE ‘ALADDIN’?

YOU REMEMBER WHEN, IN THE CAVE OF WONDERS, ABU CAN’T RESIST THE GOLDEN FRUIT?

IT’S A PINEAPPLE OR SOMETHING, I DON’T REMEMBER.

THERE YOU GO, IT’S THE STATUE THAT’S GOLD. RIGHT.

HE’S A MONKEY. SOMETIMES WE HAVE TO BE MORE THAN MONKEYS.

Suddenly, CEDRIC has a thought and his expression changes.

I HAVE TO GO GUYS.

CEDRIC leaves the room and returns to his basement, remembering that it will be one of his last times.

They don't sleep, they don't dream.

the source of Chaos in the Universe.

Previous// CEDRIC 014: Shroud
pm@straud : the school, the library
Next// GOTH 007: Arms Race
in which Lucia camps out on Cassandra's yard