MANDARC uneasily turns his cellphone over in his hands. He hates car rides but VLADISLAUS STRAUD insists they travel the old-fashioned way whenever possible.

The car is silent except for some mathematically consistent classical piece playing on the radio, dimmed to almost an imperceptable level.

Suddenly, his cellphone buzzes. He scrolls through a few screens but finds it difficult to focus on the words. The car’s jostling leaves him always on the edge of quivering. 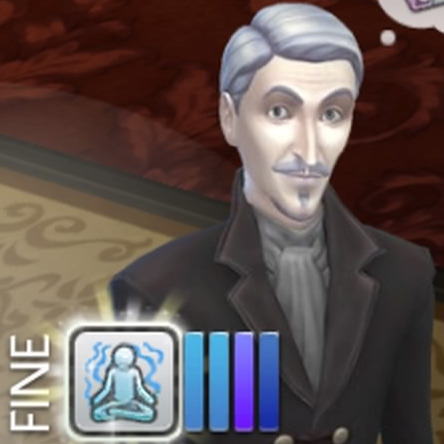 you'll not be seeing the mother today

MANDARC is both relieved and worried as the words populate. The Master always took one job and replaced it with another.

I need you to check on Cummings.

BOBBIE CUMMINGS, or SERGEANT BOBBIE as she is known by her ‘friends’, is a former vampire forcibly cured in a surprise takedown by MANDARC and ex-girlfriend FRIDAY PERKINS.

MANDARC is silent for a moment, collecting his words.

I… HE WANTS ME TO CHECK ON BOBBIE.

MANDARC looks out the window. It is frosted.

I DON’T TRUST THE BITCH AS FAR AS I COULD THROW HER.

WELL THEN WHY COULDN’T HE SEND YOU?

YOU WANNA ASK HIM?

MANDARC stares at the message for a few moments before passing the cellphone to CEDRIC.

WHAT DO YOU MAKE OF THIS?

CEDRIC squints for a moment. MANDARC has his phone set with a small font on low contrast.

‘TO FRATERNIZE’. IT MEANS BE FRIENDLY TO –

(interrupting) I KNOW WHAT IT MEANS, DICKBAG.

CEDRIC passes the phone back to MANDARC.

The three ride in silence for a few more minutes, during which time MANDARC stares out the window anxiously watching the street signs.

He is lost in thought when KEVIN stops the car suddenly in the middle of the road.

THIS IS IT, BOYS. LEFT SIDE.

MYRTLE MARSCAPONE lives in a modest one-story ranch painted a pale pink with contrasting blued shutters. A light emanates from the front room. Though he will not enter the house today, MANDARC feels a sense of forboding.

(thinking) I wish I WERE going inside.

KEVIN turns on the blinkers; they click and clack.

MANDARC, CEDRIC exit the rear doors. They stand on opposite sides of the street while he drives off, presumably to park his bright teal jalopy.

MANDARC, CEDRIC walk up to the porch. The bright moonlight casts lengthy shadows through the columns.

MANDARC takes a step backward and steadies himself. He raises his arms and the loud squeak of a bat is heard while he disappears in a puff of black smoke. The smoke dissipates quickly, revealing a bat clutching to the underside of the porch roof. MANDARC has revealed his shapeshift form.

CEDRIC steps into the void left by MANDARC and knocks on the door. MANDARC sees KEVIN leaving his car up the street before he flies out of sight.

MANDARC rematerializes on the front stoop of a house a few blocks over from MYRTLE. A larger house, but still one story, it is quiet and drab in the winter gloom.

Some part of him had expected he might be seeing BOBBIE again, but not this soon. SERGEANT BOBBIE had formed herself as a sort of bully, showing up at his new home after his flight from TRELAINE’s laboratory. She’d been a nothing, a nobody who wanted to make herself appear greater than she was. Perhaps she’d wanted to cure MANDARC and was enacting psychological warfare to wear him down. Regardless, it was MANDARC, PERKINS who’d taken the first true act of aggression by curing her against her will, invoking some sort of keep-off-my-grass morality.

MANDARC knew, rationally, as a vampire showing up on the doorstep of a non-vampire, he had all the right cards in his hand. But it still didn’t stop him from feeling ill-at-ease, uncomfortable. He recalled force-feeding her the concoction of garlic, how his eyes burned from the fumes. And here he was, at the Master’s command, making sure she hadn’t decided to re-enter the realm of Eternal life.

(thinking) WHY COULDN’T HE HAVE SENT CEDRIC?

His chest is tight with anxiety.

He knocks on the door. Three knocks.

But someone does answer. It’s not Bobbie, but it is a face he recognizes. One he thought impossible.

WENDY is a short girl with shiny black hair cut with a severe line of bangs over her eyes. Her eyes are large and her cheeks are reddish, as if bee-stung. She is an attractive, if overly-youthful, young woman.

MANDARC says nothing. He had believed this girl, originally presented years ago as TRELAINE’s daughter (if that were to be believed) dead in the feuds.

They look at each other for a few moments, awkwardly. It is clear to MANDARC that she doesn’t recognize him, though in his shock he takes no action.

WENDY! WHO’S AT THE DOOR?

Previous// CEDRIC 013: Duty
in which Cedric assists Mandarc in finding Myrtle Marscapone
Next// KEVIN 020: Teal
in which Myrtle muses about her friend, Minerva Charm