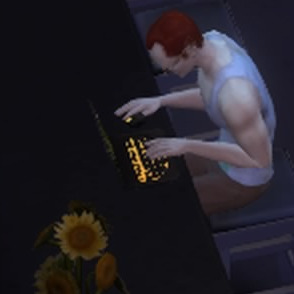 Are you at the house?

I heard the news.

I think it's great.

Can I come over? I have something for you.

It is a bright, cloudless day in Astoria when KEVIN drives up to his family complex of apartments.

Under the guise of the sale, a number of improvements have been made to the secondary set, in which KEVIN remembers spending many of his teenage years.

Improvements he’d dreamt of for years finally a reality. One of them, an imposing metal fence.

He drives up just to the edge of the driveway to open the gate.

And the chain falls to the side, the lock opened. He re-enters his car, drives it into the driveway, and closes the lock, checking its security. Twice.

There is a side-door, recently recommissioned. His mother had pushed a bookshelf in front of it at some point in the past, removing the door from service. One of the first things he’d done while sprucing up the old place was putting the bookshelf back where it belonged. But today, he decides not to use the side-door.

It always felt so...

On the front stoop sits a chess set and some uncomfortable folding chairs. Wind blows intermittently.

KEVIN pulls a light-blue lighter and a pack of cigarettes from his left pocket. He puts the cigarette in his mouth and cups his hands to guard the flame from the wind.

He inhales, drawing the acrid smoke into his lungs.

(thinking) It was a long drive.

People are getting out and about again.

They sit for a few moments in silence, listening to the pattern of inhale, exhale. Inhale. Exhale.

Soon, the front door opens. KEVIN has chosen the chair facing the door, with his back to the sidewalk. CEDRIC exits the house.

At this point, KEVIN’s cigarette is nearly out.

BRISK, BUT NICE OUT.

CEDRIC sits in the opposing chair. He can’t help but eye the passersby, but his wandering gaze doesn’t offend his guest.

WELL LET ME FINISH THIS AND WE’LL GO INSIDE.

THE LADY OF THE HOUSE IN?

YEAH. COULDN’T TELL YOU WHAT SHE’S DOING THOUGH.

KEVIN looks about the porch for the ashtray he used to keep in the corner opposite the door.

I MOVED THE ASHTRAY.

I WAS FINDING GARBAGE IN IT FROM UNWELCOME GUESTS.

I’LL JUST TAKE THIS IN THE HOUSE.

KEVIN leaves the porch, and squatting, uses the dirt to extinguish what is left of his cigarette. The embers coalesce with the dirt and soon all that’s left is the stump of a filter, the end blackened.

CEDRIC opens the door and steps inside. KEVIN follows after.

The inside of the apartment entrance is spacious. A dimly lit chandelier hangs above the door. KEVIN uses his feet to remove his shoes, kicking them off to the side. Unshod, he walks into the kitchen and deposits his trash in a small can underneath the sink.

THANKS FOR ENTERTAINING ME.

I WAS GOING TO STOP BY AFTERWARD AND SAY HI TO MY MOTHER.

SHE SEEMS TO BE DOING WELL BACK IN THE OLD ‘HOOD.

I WAS HOPING THAT’D BE THE CASE.

SHE NEVER SEEMED MUCH THE ‘RETIRIN’’ TYPE TO ME.

A quiet moment falls on the conversation.

WELL, I WASN’T GOING TO STAY LONG BUT –

A nervousness tries to rear its ugly head. KEVIN stammers and searches for words. His father’s voice rings quietly in the back of his mind, trying to offer reassurance.

I always hated giving gifts too.

KEVIN peels open the side of his jacket to reveal a leather belt the color of honey and burnt coffee. From its side, he removes a small, rose colored object.

It appears to be a pistol.

He lays it out on the counter. It is clearly in the shape of a pistol, but made of no material CEDRIC can identify.

KEVIN fumbles words, unsure of where to start. He is strangely comforted, describing his creation. He was always more at home around objects than people.

OF COURSE, I HAD STRAUD’S HELP.

PLEASE, PICK IT UP. IT’S YOURS.

CEDRIC cautiously picks up the pistol. It is exquisite.

KEVIN talks as CEDRIC looks the thing over. It is more slender than any pistol he’s held, almost weightless. But despite the almost alien design, it’s warm to the touch.

IT LOOKS LIKE A HANDGUN, BUT IT’S MORE A DARTGUN, REALLY.

HENCE THE LENGTH OF THE BARREL.

IT CARRIES WITHIN IT SIX SHOTS.

IT’S MY PROTOTYPE I WAS WORKING ON.

THE CRYSTAL WAS GIVEN TO ME. IT’S OF FOREIGN MAKE, THOUGH I CAN’T EXACTLY SAY WHAT IT IS. I DON’T THINK IT ORIGINATES FROM EARTH.

BUT THE OLD MAN IS ALWAYS OBLIQUE WITH THIS STUFF.

THE DARTS ARE A DESIGN WE WORKED ON TOGETHER. HE USED TO USE THEM IN THE OLD DAYS, HE SAID.

CEDRIC spies a lever on the back.

THAT WILL READY YOUR SHOT.

WHEN YOU PULL IT BACK IT WILL CHANGE COLOR AND LOAD A DIFFERENT CHEMICAL INTO THE DART.

Never one to mince words.

WELL. A POISON OF SORTS.

THE DARTS ARE NON-LETHAL, BUT WILL PIERCE ANY MATERIAL.

THEY ARE TIPPED BY FINEST CRYSTAL NEEDLES I COULD FASHION. WHEN THEY FIND THEIR WAY BENEATH SKIN, THEY RELEASE THEIR PAYLOAD.

SLEEPING DRAUGHT WOULD BE RELATIVELY BENIGN.

BUT ANOTHER I’VE DEVELOPED INCITES AN EXTREME PANIC IN ITS VICTIM. ONE CAN FASHION A STRANGE MIX OF CHEMICALS TO PROVOKE THEIR FIGHT OR FLIGHT RESPONSE.

Noticing CEDRIC’s pause, he tries to reassure him.

WE HOPE FOR FLIGHT, OF COURSE. AND I KNOW POISON SEEMS UNDERHANDED, AND SOME OF THE FORMULAS I’VE DEVELOPED CAN DO SOME NASTY THINGS BUT…

He places the gun back down on the counter.

IT’S NO MORE NASTY THAN SHREDDING THEIR INSIDES WITH METAL SLUGS.

SOME OF THE MORE USEFUL CHEMICALS CAN SIMPLY INDUCE A HUNGER. OR A FEELING OF JOY AND LIGHT. A EUPHORIA.

I WANTED YOU TO HAVE OPTIONS.

CEDRIC’s gaze cannot be torn from the gift.

THERE’S NOT A SHARD OF METAL IN THIS THING. PURE CRYSTAL. THAT’S WHY IT FEELS WARM. SO IT SHOULDN’T GIVE YOU THE SHIVERS LIKE WHATEVER METAL MONSTROSITY THEY’RE –

DO YOU REALLY THINK YOUR MOTHER’S GOING TO BE ABLE…

SHE’S GOT OLD FRIENDS. SO DOES THE OLD MAN.

I THINK IT’S A GOOD IDEA. WE NEED SOMEONE ON THE STREET. AND WHO ELSE BETTER.

BUT IT’LL SLIP THROUGH THE METAL DETECTORS.

AND IF YOU FLIP THIS SWITCH –

IT’LL COLLAPSE ITS STRUCTURE TO APPEAR AS AN ORDINARY PENCIL.

GRAPHITE. OR AT LEAST, THAT’S HOW IT’LL APPEAR TO OTHERS.

KEVIN picks up the pistol, presses the switch, and the shimmer disappears, leaving behind a plain yellow pencil.

BUT IT DOES HAVE A NAME.

IT’S NOTHING. AND OUR HOPE IS THAT IT APPEARS AS SUCH.

RATDEATH. BECAUSE EVERY WARRIOR NEEDS A WEAPON.

IT WAS A NAME GIVEN TO A SWORD THAT SLEW ONE OF THE MOST FEARSOME CREATURES I’VE KNOWN.

THE SWORD OF A GREAT WARRIOR.

HE WAS A HERO IN A BOOK MY FATHER READ TO ME WHEN I WAS YOUNG.

MY FATHER READ MANY STORIES TO ME, BUT THAT ONE ALWAYS STUCK WITH ME.

IF YOU ARE TRULY GOING TO GO OUT THERE, THEN YOU’LL NEED ALL THE HELP YOU CAN GET.

… THE HERO’S ENEMY, A REMORSELESS BEAST –

BUT IT CAN’T BE HELPED. IT’S AN OLD PREJUDICE OF MINE, ONE I CAN’T HELP BUT …

WE WILL HEAL THEM. AND WE MUST NOT SHIRK AWAY, FORGETTING THE ORIGIN OF THE LAW IN THE REPETITION OF TRADITION.

Previous// CEDRIC 020: Crocodile
in which Myrtle reminisces with Cedric
Next// PERKINS 007: Mister
in which Weaslie receives a handwritten letter